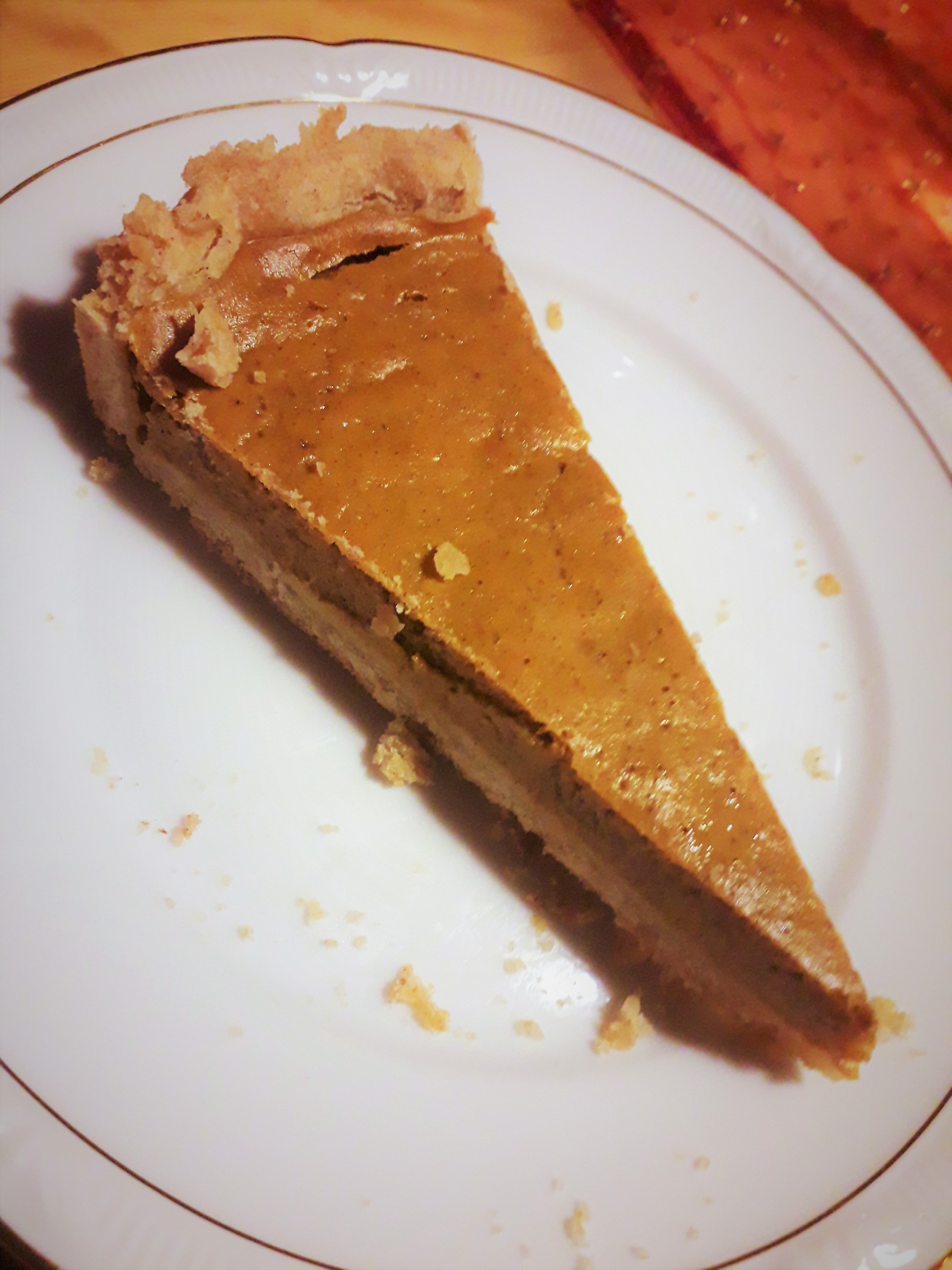 And here I am, with yet another American pie recipe, straight from the US, and intended to be the sweet culmination of our Friendsgiving Dinner – an evening of all-American food traditions, from turkey to stuffing to sweet potato mash with marshmellows (yuk). However, as I was assured by my American fellows, one does not make a pumpkin pie without the original canned pumpkin puree and a proper pie crust. Unfortunately, you can’t get either of those in Germany (or maybe you could if you looked at the right places) so a plan B was required. The former was sent in a care package from John’s Mamazon which due to last minute order did not arrive in time so the whole pumpkin pie baking event had to be postponed till Christmas.

Friendsgiving was a magnificent feast nonetheless, but that’s another story for another time. Now we want pie. So fast forward to the night before Christmas and into my kitchen. With the pumpkin puree problem solved, we could now tackle the pie crust conundrum. After a thorough internet research and vivid discussion, I settled on a combination of two recipes. So here it is, the ultimate, super flaky, buttery and tender pie crust recipe that satisfies even the high expectations of Mister JC.

Put flour and salt in a mixing bowl. Add the chilled and chopped butter and marguerine. Use a fork to mix and mash them with the flour until the dough resembles coarse crumbs. Carefully add water so that the crumbs slightly clump together. Gently mold the dough into a ball and divide it into 2 pieces, one for the base and one for the cover. For the real pumpkin pie, you don’t need a cover so maybe just use 3/5 of the ingredients and just make one flat disk carefully pressed with your hands. Wrap it up in plastic and let it chill in the fridge for minimum 2 hours. 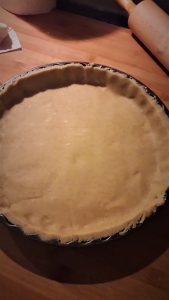 Take a big baking board and place a large parchment paper sheet on it. Lightly flour both pie dough disc sides and set in on the paper. Take a rolling pin and carefully press the disk into a larger circle a little bigger than the pie pan (so that you can still cover the rim) and appr. 1 cm thick. Carefully take the parchment paper and put the dough upside down into the pie pan and remove the pater. Smooth out the edges and make it all look nice, neat and tidy. Trim the overlapping bits and pieces. And there you go! That’s it!!

Now for the rest of the recipe, just follow the instructions on you pumpkin puree tin. We had Wegman’s which gives you the following (summarized) directions: 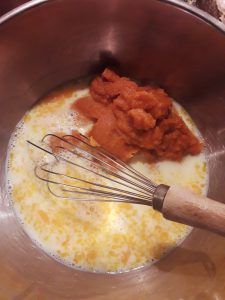 Combine 1 cup of milk, 1 pumpkin puree can and 2 large eggs in a bowl. Combine 3/4 cup of granulated sugar, 2 Tablespoons of corn starch, a bit of salt, 2 teaspoons of cinnamon and 1 teaspoon of nutmeg in a separate bowl and only then add it to the other bowl. Stir well and pour into the previously prepared super flaky pie crust. 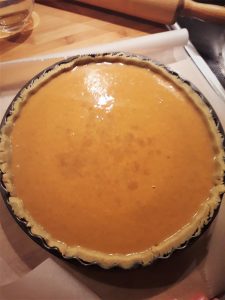 Bake in the oven for 50-55 minutes. Now this is very important (and very difficulf to follow through by people like me): let it cool completely on a rack.

It tastes better the day after. Believe me. It’s difficult to resist, but worth trying.

And then enjoy a perfect piece of pumpkin pie with the flakiest pie crust you’ve ever had. 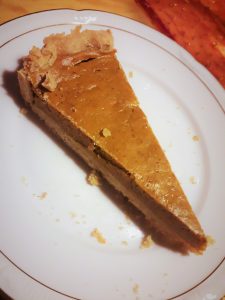 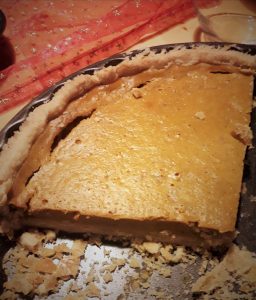