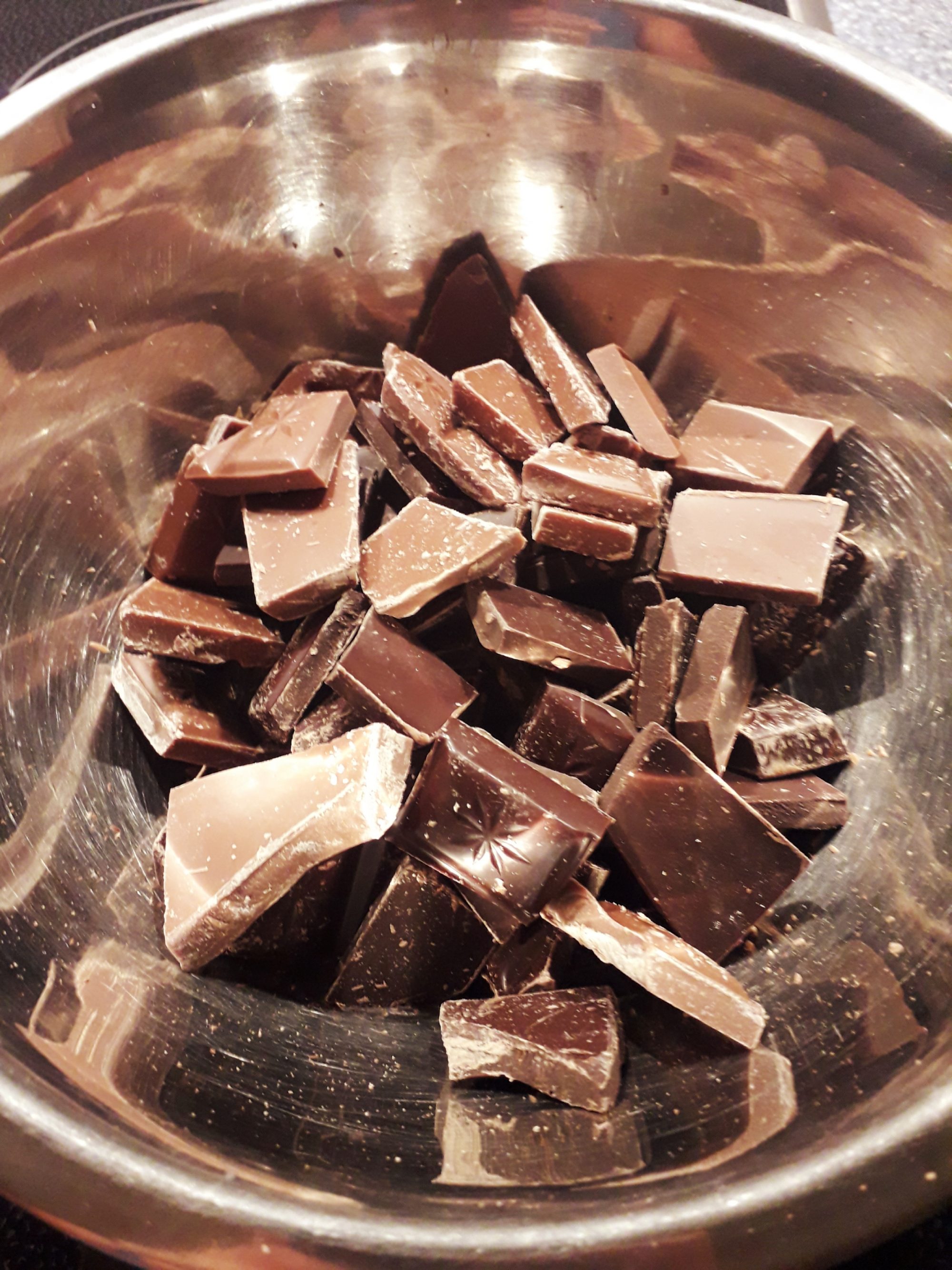 If you hate those recipes that start telling a Homer-esque epos that lead to its creation, you may skip to CHAPTER I. and get right into baking. If youdo have a little interest in me and my quirky tales, read on! I’ll keep it fairly short, pinky swear!

I was sitting in a Otorhinolaryngologist’s waiting room to finally do something about my nosebleeds. While I was sitting and waiting, I flipped through one of those women’s magazines and found a very rich and dense looking chocolate cream cake recipe. With me being hungry and that cake looking very yummy, I took a photo, had my doctor’s appointment and forgot about it for a while. A couple of days later, I rediscovered it on my phone and because I was again hungry (when am I not hungry?) and that cake still looked very yummy, I decided to give it a try. Admittedly, the rum factor contributed a fair share, too. Since we spontaneously celebrated New Year’s Eve at my place, our Rum stocks have significantly increased and need to be consumed in other ways than drinking [Disclaimer: not really a fan of drinking rum]. And this recipe was as rich on rum as it was on chocolate. Being a culinary half-blood prince, I of course did not stick to the recipe but made a few adjustments here and there and as usual ignored precise quantities. The numbers in my recipe down there are therefore inbetween the original recipe and rough estimations.

CHAPTER I. The Cake Base.

Preheat the oven to 180°C ( ≈  356 Fahrenheit) on upper & lower heat. Cream 3 eggyolks with 50g white sugar. Whisk 3 tbsp cocao powder and another 50g white sugar into it. In a separate bowl, beat 3 egg whites with a pinch of salt until stiff and carefully fold in the cocao mixture. Blend 100g plain flour with 2 tsp baking powder and 2 tbsp instant coffee and slowly stir them into the batter.

Take a baking tray, put some baking paper on it and spread the batter circularly so it covers at least the diameter of a cake ring (which we will be using later anyway, so just keep it nearby). Bake in the oven for app. 25 minutes and let it rest. Once it’s cooled down, take aforementioned cake ring and cut out a perfectly round cake base. Leave the cake ring attached. Nibble the remaining bits and crumbles because that’s what baking’s all about anyway.

Aka the best, chocolatest, densest and thus most important step. Heat 250g dark bitter chocolate and 100g milk chocolate in a bain-marie – and OMG, what a noble expression, so French cuisine and nothing like the plain German literally translated as “water bath”. Anyway, melt that shit. Clever people break up the chocolate bar BEFORE opening the package.

Now if you feel really fancy, chop up some Lindt Lindor dark bitter chocolate balls and add them to the melting pot.

While you’re waiting for it to turn into hot liquid temptation, whisk together 2 egg yolks, 2 eggs, 50g white sugar and 8 tbsp Rum. Add the melted chocolate and 125g Quark (I think it’s curd cheese in English? I remember it was super difficult to get it in the UK. If all else fails, Greek yoghurt could work as a substitute but it’ll make it even denser and richer. Don’t pretend you haven’t been warned.). Add 4 tbsp instant coffee. Whisk 250g cream until stiff and add that, too. Pour the mixture over the cake base and let it rest at a cool place for at least 4 hours, better over night. I just left it outside on my balcony in deep winter and it hardened just fine.

Whisk 125ml cream with some stabilizer and pour the chocolate fondue into it. Let it cool down a bit – it doesn’t have to be cold, lukewarm is fine – and adjust it to the cake, sides and top. Use a dough scraper to get it all nice and smooth. Unwrap Lindt Lindor dark bitter chocolate balls and cut them in halves. Set them on the outer ring of the cake, one half for each slice, and one in the middle. Sprinkle chocolate sprinkles or grated chocolate everywhere – I personally love the dark bitter sprinkles but that’s up to you, really.

And now take a pastry fork and go right into the soft creamy texture and indulge this sinful, rich dessert.