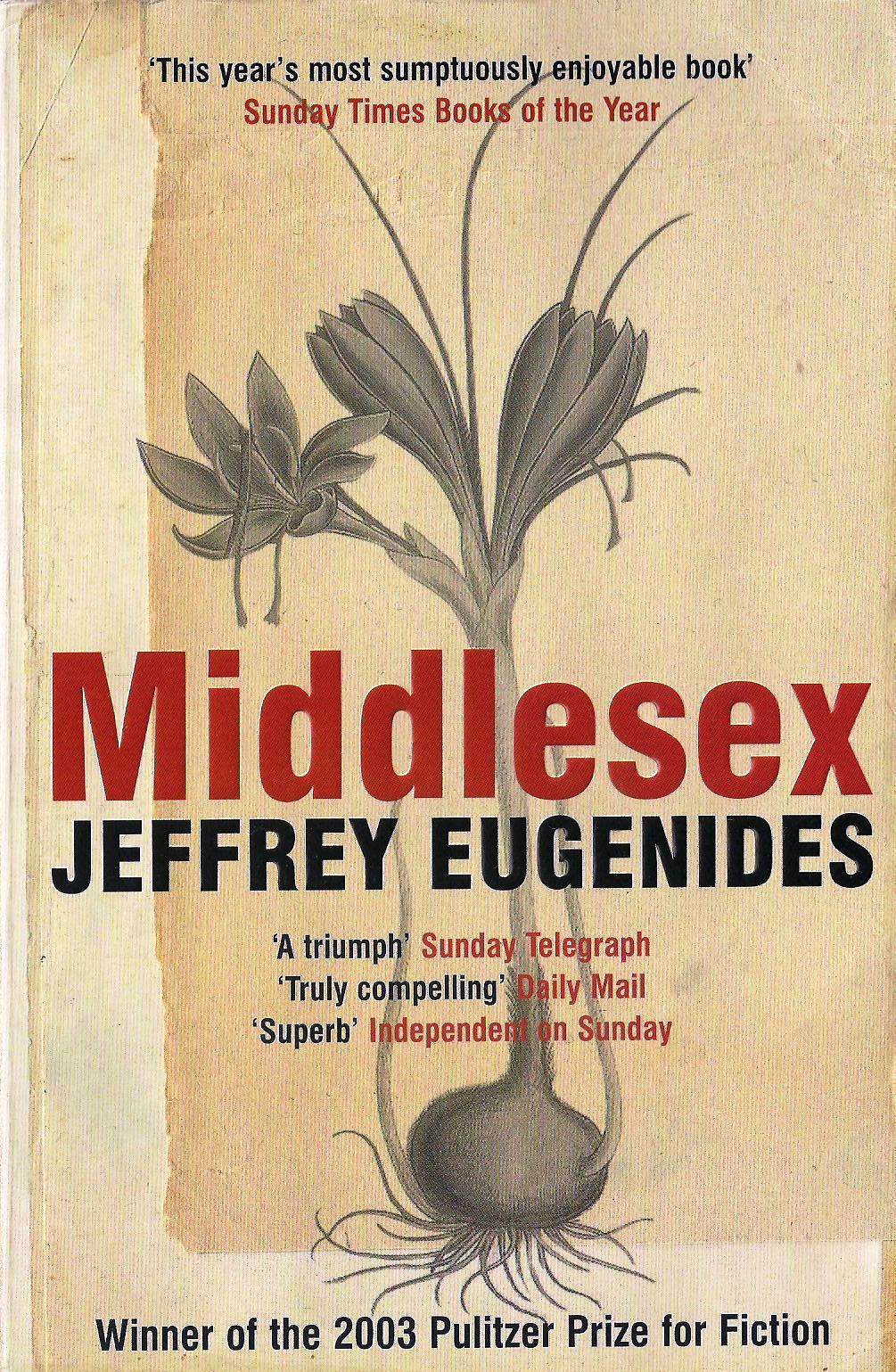 Whereas I, even now, persist in believing that these black marks on white paper bear the greatest significance, that if I keep writing I might be able to catch the rainbow of consciousness in a jar.

Middlesex is Jeffrey Eugenide’s second novel. After the much promising The Virgin Suicides, it was not surprising that his 2002 novel of epic proportions would win the Pulitzer Price for Fiction in 2003. In 4 books, 28 chapters, and 529 pages, a monumental Bildungsroman portrays the epic family saga of hermaphrodite Cal. It is a story about the American Dream, about love and obsession, rebirth and puberty. It explores questions of gender and cultural identity, incest and other family secrets. It’s a migration tale of a Greek-American family that clearly originates in the author’s background (yet should not be read as autobiographical).

I was born twice: first, as a baby girl, on a remarkably smogless Detroit day in January of 1960; and then again, as a teenage boy, in an emergency room near Petoskey, Michigan, in August of 1974.

With a vigorous opening line like this, Eugenides clearly does not beat around the bush. What follows this promising beginning is the story of Cal Stephanides, former known as Calliope, and how he became a ‘he’, how he discovered, and learnt to accept and adopt his hermaphroditic nature. Together with Cal, we’re (literary) travelling back in time to explore his/her teenage years respectively but also the story of how Cal’s ancestors immigrated to the US and their struggle to assimilate to the American way yet obtain their cultural inheritance.

The opening chapter already combines all these themes: Yia-Yia Desdemona swings her spoon to reveal Cal’s gender antenatal and fails at the first attempt. It’s such a symbolic scene of how the Greek inheritance and superstition cannot stand up against the genetically caused inter-sexism. Celebrity Death Match. Tradition VS DNA. Halfway through the book, you are so captivated by the Stephanides’ family saga, you almost forget about the primary hermaphroditic hook in the beginning. The tale of Lefty and Des, who flee their hometown in Greece to escape the war, are siblings madly in love with each other and start a new life as immigrants in Detroit, USA, as a married couple. Their incest remains a secret for many many years, until Des eventually testifies to her grandchild. To cut a long family tree short: Lefty and Des have a son, Milton. Milton marries Tessie. Milton and Tessie have two kids, Chapter Eleven (whose proper name is never revealed to the reader) and Calliope. The three-generation family lives in a house with the eponymous name Middlesex. “Did anybody ever live in a house as strange? As sci-fi? A house that was more like communism, better in theory than reality?”

From here, Cal sets our on her/his teenage adventures. It is not so much a tale of an hermaphrodite as a personal account of the confusions and struggles of puberty. This makes Middlesex – beside other factors – so brilliant: Eugenides never pushes the subject of inter-sexuality and gender identity too hard, there’s no in your face. Instead, it is neatly woven into the saga, never omitted but always acknowledged while basically telling a coming-of-age story. Our internally focalized narrator Cal occasionally slips into ironic, sarcastic, sometimes even stern comments to remind us of his/her genetic condition yet there’s never a moment where you feel lectured on a moral ground.

Jeffrey Eugenides is a literary genius. Period. How he describes emotions in such striking imagery yet at the same time remains so pure, prosaic and pragmatic in his style is pure genius:

When he spoke to himself, it was in complete paragraphs. If you listened closely, it was possible to hear the dashes and commas in his speech, even the colons and semicolons.

His narrative voice, Cal, the omniscient overseer beyond time, mind and existence, who dares to comment on his own conception, is an excellent and very unusual choice of narrative focus. Cal is an extremely audacious, wondrous, pointy and eloquent narrator, who never ceases to draw our attention and empathy, may it be towards himself or any of his ancestors.

Middlesex is a collection of indiviual stories, each in themselves very touching and worth telling and skillfully brought together under the greater arch of genetics, sex, love and gender.

Eugenides has a somewhat weird take on sex scenes though. Not that there’s a lack of very explicit sexual episodes. However, they all are a bit off in the way they are told: one is incestuous, one uses the clarinet (of all instruments!!!!) as an erotic metaphor for hormonally motivated lust, one is experienced by Cal twice simultaneously – by herself, with Jerome “sliding and climbing on top of me like a crushing weight. So do boy and men announce their intentions. They cover you like a sarcophagus lid. And call it love.” (yeah, that sarcophargus reference makes sex totally appealing) and at the same time impersonating Rex Reese, who is ‘busy’ with Cal’s real love interest, the obscure object. Cal lives his feelings, sexual fulfilment and satisfaction empathetically through someone else.

The whole 529 pages are amazing from beginning to end. Most intriguing is probably The Obscure Object. I re-read the whole chapter twice. But then there are also so many neat one-liners, you kinda wanna quote them all.

I did what any loving, loyal daughter would have done who had been raised on a diet of Hercules movies.

“It’s like the paintings in the museum,” she said, “Just an excuse to show people with no clothes.”

What else is there to say? Much more. So much more. This book opens up for discussion and I warmly welcome you to read it and go into an in-depth analysis with me. It’s literary dimensions are of such significance, it will probably be called one of our modern classics any time soon. Furthermore, it matters. What a truly compelling, transatlantic and outstanding epic tale.

Go and read it. Please.