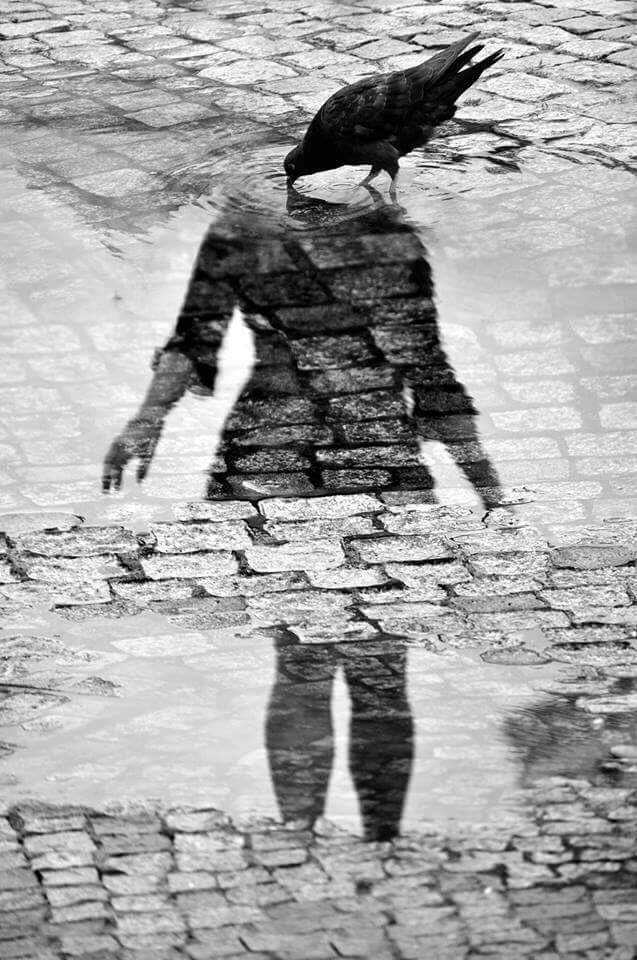 Clearly we have, because that what it says up there right before the .com. And despite the subheader “Literary Rhapsodies, Bad Puns and Emotional Outbursts of a Distracted Mind” I don’t think I have ever explained what The Intellectual Chaos inclines. Well, you’re about to find out! If you wish.

I’ve started blogging way back in 2010, when I moved to Birmingham, UK. Almost everyone those days went abroad somewhere and they all started sending out semi-personalized newsletters (which I hated because either write ME or don’t bother at all) or they created a blogspot account – oh, those innocent blogspot days before tumblr and wordpress took over. Is blogspot still a thing even? Back then it was and so I, too, gained my first blogging experiences on their website. I wrote in German, for my friends and family back home in order to keep them informed about the weird and wondrous adventures and encounters I had in the “Venice of the North”. I can’t recall what it was called back then. Hm. But I remember how annoyed I was because I didn’t have a proper laptop, just my tiny little netbook aka a pain in the ass to write with, so I spent my freetime in the university’s library blogging on their computers, not being able to figure out how to change the keyboard to German (my IT skills were somewhere between horrific and non-existant back then. Luckily, I have improved. Not much, but I manage) and getting really annoyed about the whole z-y-permutation, wrote once one very passive agressive article about it and then just decided to not care anzmore if mz y and zs were mixed up.

Soon I settled in, made some British friends, so adorable British accents all around ♥ and decided to let them in on my outsider’s perspective on their country and culture. My blogspot’s name was subsequently changed to a pun – of course – because I had learned the phrase what a sight to behold (thanks, Ellis) and since almost everything I saw was worthy to behold, I tried to do exactly that and thus thought it a very fitting title. And eversince my blogsite was known as “What a Site to Behold” and marked my entry into the English speaking world of puns and, if I may say, I have acquired some pretty decent skills since then. One of the site-effects you could say.

Once I was back in Germany, I kept blogging, now foremost addressed to my UK friends and as a means to keep up my language skills in general and specifically to practice my writing skills because after all, there are yet so many words or phrases that I don’t know or use wrongly and I still suck at prepositions (ugh, those tiny two-letter words, in, of, at. I hate you and your random rules) so I saw it as a fun opportunity to improve and express myself. As it is so often in life, my blogging activity slowly subsided and my blogspot (that had meanwhile been transfered to tumblr) became dormant for quite some time until I did a relaunch and for the first time used The Intellectual Chaos (.tumblr.com) as my online identity. Soon after, tumblr just didn’t do it for me anymore. I love the tumblr community and that whole platform is hilarious and a nerd paradise for all fields and topics. But I wanted something for myself. And so I bought this domain right here. And then nothing happened. Because life. Of course. Yeah, I experienced a little with the templates, I chose photos, I wrote About Mes and whatnot. But it took me a while to actually get going. One of the reasons is that I’m more self-conscious than I used to be and I am my worst critic. I’m glad you can’t see how many unfinished drafts are in my Posts-folder just because I’m not content with my writing or insecure about whether I should even write about this or that because there are so much people out there who know so much more about whatever I write about (but then I’m so much more fun to listen to!). Funnily enough, most of the stuff I publish in the end has been written within an hour or two, when the muse hit me and the words just keep pouring out of me. Like this text, for example. It’s 6.22am right now, I’m all snuggled on my couch in a pompous blue velvet blanket with a mug of coffee beside me, the only sound being the clickediclickclack of my fingers running along the keyboard. (And the crying child upstairs. And the city’s cleaning car outside. And the trams passing by. But for poetic reasons, we shall ignore them for now.) You see: the intellectual chaos is right there manifested in the conundrum whether to write or not to write, as the great bard would say. And so….

We have arrived at an intellectual chaos.

These are actually not my words but those of one of my favourite authors: Aleksandr Solzhenitsyn. The Russian writer and historian, 1918-2008, is most famously known for his literary contribution – both fictional and non-fictional and from first-hand experience – on Soviet labour force camps, thus raising international awareness for the Gulags and Stalin’s regime of terror. So far I’ve only read The Gulag Archipelago and One Day in the Life of Denis Ivanovich because Solzhenitsyn is nothing to read on a light summer’s day. It’s intense and you gotta feel up for it. Intense stuff. Right over there The First Circle is waiting for me and I’m only two books further up on my reading list away from it (sidenote: one of them is a short story by Bulgakov. He, too, is a Soviet literary genius. Master(piece) and Margarita). Solzhenitsyn’s views on politics and society and the Soviet Union on the 20th century are clinical, cold, and judgmental (and who could possibly blame him or even disagree for that matter?!?). I urge you to dedicate him some of your time and attention.

Surely one would wonder if it is inappropriate to use an expression arisen from such a gruesome chapter of history, shouldn’t they? Maybe. But then you see, the quote perfectly sums up the ridiculous atmosphere under Stalin where the intellectual elite was at the mercy of the government’s ever-changing mercy and favour. They were at constant battle with themselves, trying to maintain their artistic aspiration and stay true to themselves while never knowing if what they wrote or painted or composed or in any other way artistically or intellectually produced would be praised and celebrated or despised or deemed “too western” which would have them put under observance, and them and their families in great danger and possibly eventually in Gulags. Or worse.

I have arrived at an intellectual chaos.

Because I, too, find myself in a constant battle – don’t we all? – about what is going on in my head, what I want to say, all the things I think, all the things I think about but they have no outlet and even if they did, I’d think too much about the consequences of sharing these and what others might think. My mind hardly ever stops. I don’t sleep well, I have a constant restlessness, my thoughts go from here to there, they jump back and forth, and go on a rollercoaster ride, and if I didn’t have some sort of means to get at this out, it would be literally mind-blowing and not in a good way. I have so many interests and ideas about all and everything. There’s chaos up here in the thought department and it needs channelling. And this is it. From previous posts you know that I sometimes struggle – again: don’t we all? – but the good news is that I found or I am finding ways to cope. This is one of them. Just getting the words and thoughts out – and as you witness, they are there and I didn’t even have to look for them – and ignoring the critic inside of me and my ever-prevailing self-consciousness.

The Intellectual Chaos is me. It works. It fits perfectly. 100% Yes.

[The feature image is by Polish artist Alicja Posłuszna: Indoctrination/Indoktrynacja, 2016. Go check out her instagram! And if you feel like buying me an Intellectual Chaos present, I won’t stop you ;)]