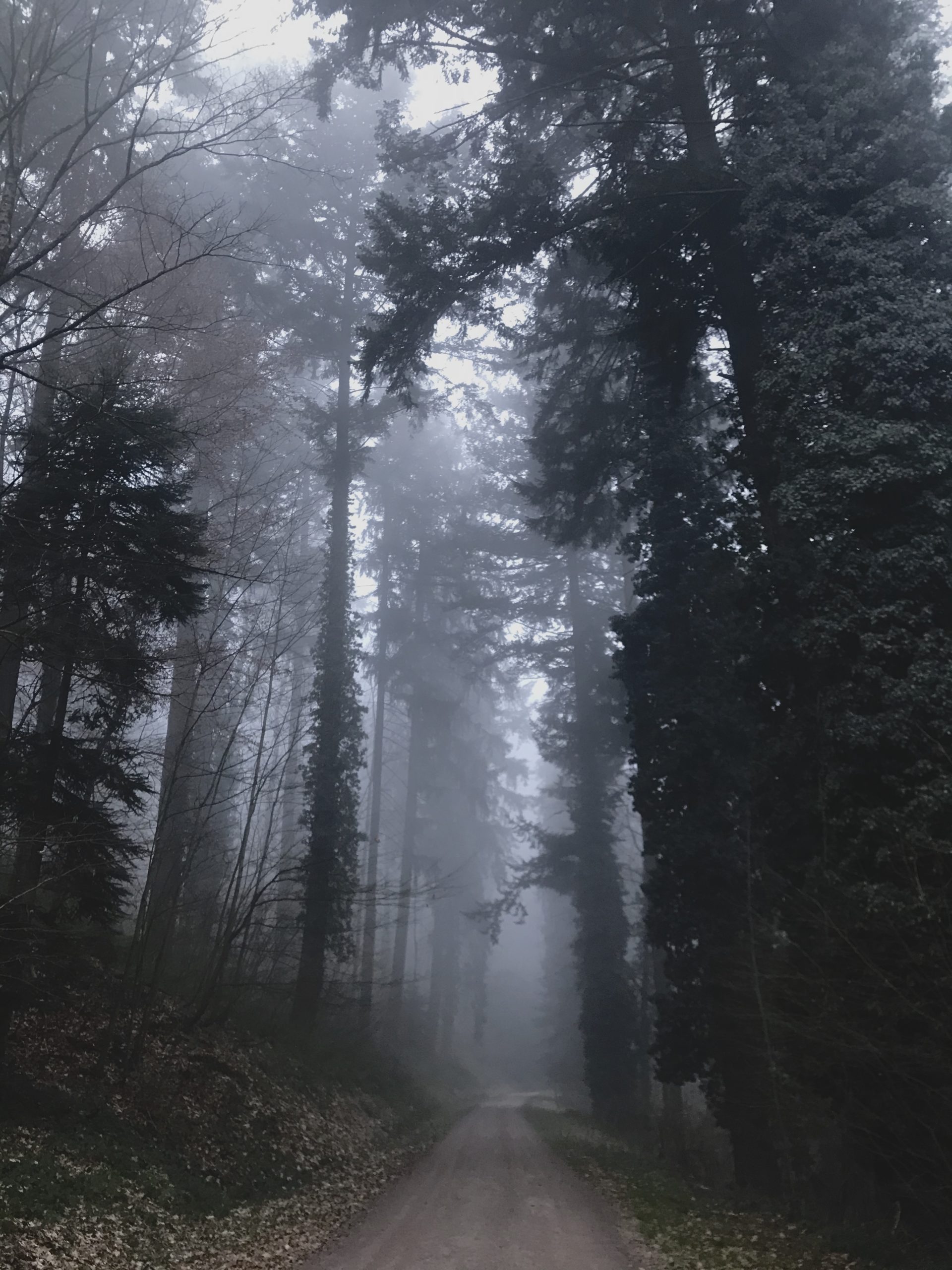 A linguistic deliberation on phrases and their imagery.

Sometimes my mind goes to strange places. There’s a part of my brain that just refuses to sleep and randomly decides in the middle of the night it’s bored and the one-digit a.m. times are perfect for partying. And so it knocks on the outside of its little brain compartment, making itself noticed, metaphorically pulling away my duvet and nudging me – cat owners and parents of little kids can relate – until I grudgingly give in and wake up, with quintessential questions in my mind such as “orange – was the colour named after the fruit or the other way round?” [SPOILER: answer A] or I suddenly have the perfect comeback back then at that incident a bazillion years ago. Mind you, my comebacks are the best, they just take forever. Treppenwitz, as we call them. I am extremely witty when given enough time. Like the culinary world, I follow the trend from fast-food and quick-wit to slow. Gut Ding will Weile haben. Little literary fun fact: did you know that Shakespeare thought of women being witty as an equivalent to them being sexy? That’s why especially in his comedies all female love interests are always witty as fuck. Yes! Intelligence is sexy and it took our society far too long to make nerds officially more desirable than bodybuilders.

Side note: I sure appreciate a defined body. But in the end and if I had to choose, I prefer long-sentence elaborate conversation over testosterone loaded primitivity. Healthy mind and healthy body is the secret. Menssana in corpore sano. Now you know. So go workout and read some Proust while doing so.

Another side note: I’m witty and already sexy, so technically that makes me double sexy, so how come I am still single, helloooo?!? (dm if you fit the profile ;))

My most recent nightly brain rave was triggered by the Insta account @the.language.nerds and their story on how to say “to decide” in various languages. Unfortunately, that post is long gone but I remember the French and Italian say – literally translated – to take a decision and I like to think of it as picking up the options, like two pieces of fruit, one in each hand, and carfeully weighing them against each other before taking the one that seems more desirable and tossing the other one away. The English on the other hand don‘t take. They make. To make a decision. So proactive. That’s how you build an Empire. And the Germans? Wir treffen eine Entscheidung. Hello, options, so very nice to meet you! One of you will be granted a second date so welcome to the Bachelor of opportunities!

The other possible translation for treffen is to hit, as in hit a target. Because obviously you decided well and hit the jackpot. Mitten ins Schwarze. Hitting the bull‘s eye. German efficiency at its best. Adn then I was done thinking. I though. And a few hours later, in the middle of the night, I woke up saying – yes, really saying it out loud – „aber wir sagen doch auch „eine Entscheidung fällen!““ And then I thought about that a lot. If you consider the above mentioned expressions as strong images, think about this one. The only other things we „fällen“ are sentences in court (to rule) or trees (to cut down). Isn‘t that sort of gloomy? Deciding is either definite, it‘s authorized by an higher authority, it‘s binding, and you gotta live with the consequences. Before we take like the French and Italians do, we have the whole court trial, listen to prosecution und defendant and call the witnesses to the stand. Or we take the axe and go Paul Bunyan on our options. Seems quite radical and brutal, doesn‘t it? There‘s no way back once the tree‘s down and it involves an act of violence and destruction. I think I even sent @the.language.nerds a dm about it. And then I thought some more, especially regarding my recent history of major decisions and that really life-changing (overdue) step a very dear friend of mine had to take, too, and thus needed some moral backing-up and of course I got you, woman, I got you.

Ready for a tree parabel?

Imagine a tree. A very mighty tree, with thick and thin twigs, deeply rooted in the ground, solid, strong, deutsche Eiche, rich crown and branching. One that shields you from the sky – protecting you from the rain maybe, but also blocking the sunlight and the view up to the stars, where dreams are born. To even dare taking it down requires balls. And strength. And a chainsaw, if the tree’s one of those mammoth trees and national heritage. Sounds pretty intimidating, doesn’t it? Well, unfortunately, yes, sometimes that is the case. I had two very important decisions to make i. e. trees to cut lately and both required all my will-power and an Oscar-worthy outstanding performance as supporting acts by some very special people in my life without which I could have never done it – you know who you are. And I thank you. So I told above mentioned friend the following: it’s not gonna be easy. It’s gonna be fucking hard. And it’s gonna hurt. But you can do it. Because once you’ve cut it down, once you’ve made that decision you prolonged, once you literally got to the roots of your problem, then you will see the sky again. And of course, there will be blood, because wo gehobelt wird, da fallen Späne (the German equivalent of “You have to break and egg to make an omelette”, literally “Where there’s planing there’s chipping”) and there will always be a very empty spot with a sad tree trunk with resin oozing from its wounds. But it’ll heal. And soon you will be looking back at it and it will be covered in moss and grass, butterflies and birds and other forestic animals will be nestling there – in my case squirrels, because I love squirrels and I want a pet squirrel please, and until then I have a virtual,

and an actual address to go, the Eichhörnchen rescue center of Freiburg YES THERE IS A FREAKING SQUIRREL STATION IN FREIBURG and I am in love but I am also heartbroken because “Bitte haben Sie Verständnis, dass Besuche in der Eichhörnchen-Station  nicht möglich sind, da diese für die Tiere (und mich) Stress bedeuten… ” ??? so I actually don’t have an actual address to go to but I understand your reasons and I still dig your work, Steph, keep going! – and one of the main reasons I like my Günterstal running track every other day is because I meet so many squirrels on my way and sometimes they even run with me before scurrying up some tree. I’m in love.

Oh, do you know The Adventures of the Black Hand Gang? THE Englisch Lernkrimi for kids. It’s the best.

Mystery crime story on the left page and a corresponding picture puzzle on the right and despite the fact that I didn’t understand a single word at first and only cared about what to look for in the picture, the most vivid thing I remember next to Ralph (or was it Frank?) and his trumpet was that one of these young investigators, Keith, had W. S. attached to his name, short for “With Squirrel” because he really did have a pet squirrel and dear Hans Jürgen Press (that‘s the author), let me tell you: I loved the puzzles, I loved the stories, but “with squirrel” is up to date amongst the most difficult phrases to pronounce. / wɪð skwɝrəl / Th and the squ and the english r-sound. Especially after a standard-vowel-pronunciation ignoring name followed by another th like kɪɪɪɪɪ:ð Why would you make such an adorable animal such a nuisance to pronounce? So frustrating! And I didn’t even have one. I am and have always been Without Squirrel. Nut cool. [In order for my non-German readers to relate, please re-read that whole paragraph out loud but substitute every single squirrel with Eichhörnchen.]

You will still see what once had been. But the wounds will have healed and it will become a memory that shaped you, that left its traces, but that hurts less and less and will make space for new life, and new experiences to grow and flourish. And with that beautiful picture, my mind was finally at ease again and went back to sweet dreams of forest clearings, wise and brave decisions and a blooming future yet to come.