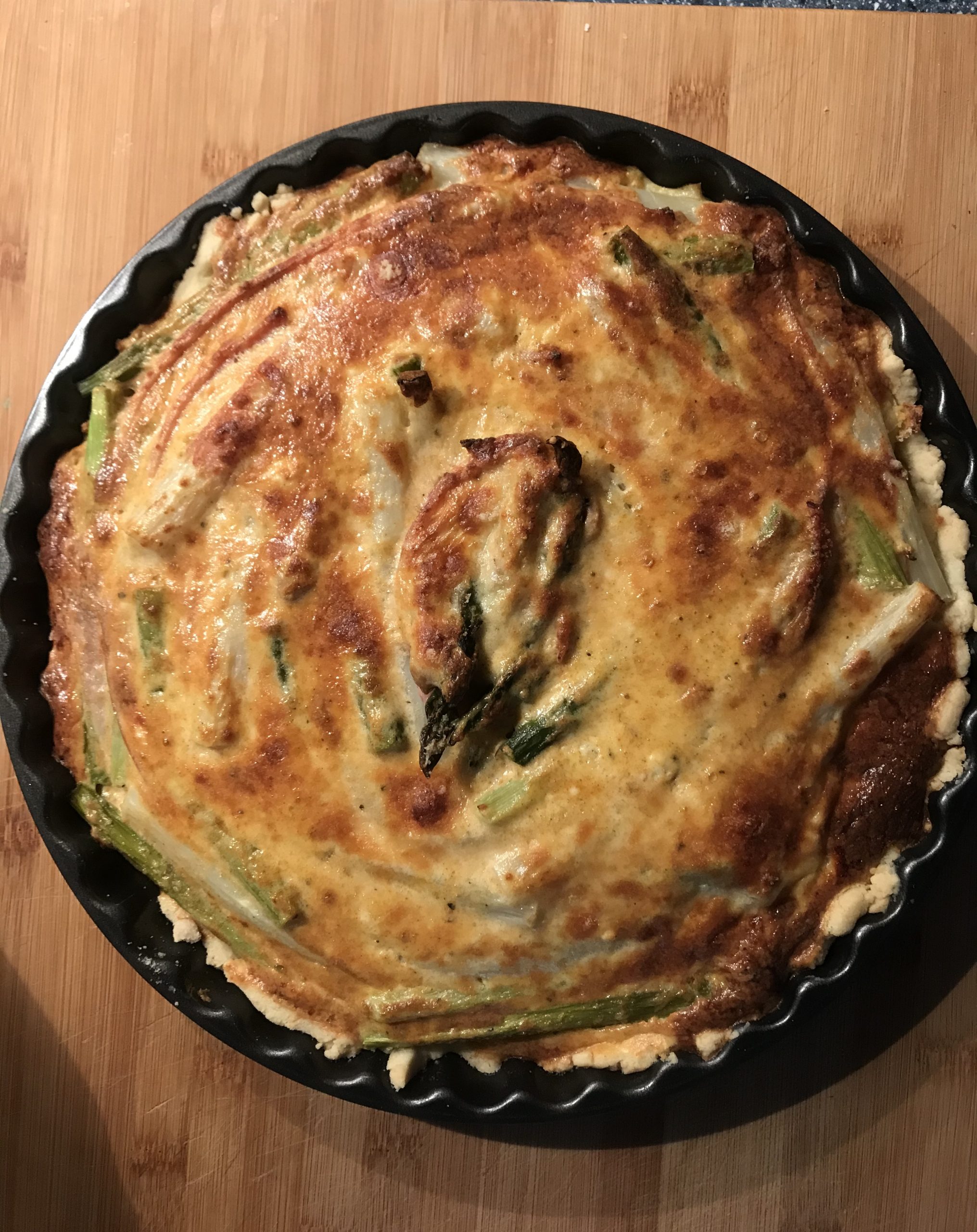 ….is that title of a satirical, very, very masculine cookbook by Bruce Feirstein. And this is a recipe!

So everyone with a fragile masculinity should probably stop reading and start on more testosteroic activities – The Manly Art of Knitting should do the trick, another literary gem. Sadly, you will then miss out on a delicious springtime dish and that means, there will be more for me, yay! Usually, a quiche needs three things: a flaky savoury pie crust (which can be bought, but here we’ll DIY), an egg-milk-mixture, and chopped up ingredients scrambled and mashed up beyond recognition. However, this specific recipe requires some manual skills. Don’t be scared though. I don’t have any, and yet I managed.

Alright then, here we go:

For the dough mix 225g plain flour /125g cold (!) butter, sliced up / 1 egg yolk / 1/2 tsp salt together. Use your hands, dig in there and have some cold water and some flour ready in case you need to adjust. Knead knead knead until you have a nice, sticky but not too gooey dough so you may roll it into a ball, wrap it in cling foil and let it chill in the fridge for an hour.

In the meantime, peel and boil 6 middle-sized potatoes as one does. Once they‘re done, take them out and mash them with a fork and add some salt, pepper and nutmeg.

While you‘re waiting for the potatoes to be done, we will see for the asparagus. We‘ll need 300g each of white and green asparagus. Take a big pot (the asparagus should in its length fit in) fill it halfway with water, add a little salt and a piece of butter and get it to boiling. Peel the white asparagus and chop off the rear end. Now depending on the thickness and state of the green asparagus, you chop off the end, too, and might have to peel it, too. Green asparagus doesn’t necessarily have to be peeled unless it’s very wooden at the outer layer. As soon as the water is ready, first put the white asparagus in and add the green one after 1-2 minutes. Close the lid, reduce the temperature so it’s not boiling but still hot and leave it in there for 5-6 minutes. It shouldn’t be done completely but it should be significantly softer. Strive for nice and bendy. Take them out of the water and set them aside to cool down a bit.

About now the dough should be chill enough (you may also just make it a day ahead, Quiche dough loves to chill) and ready to be waltzed out (I‘m aware you can’t say that but in German, we say auswalzen and I kinda like the idea that the dough is rolled out to all sides as if you‘re following a waltzes steps. Anyway, we want it round and it should just fit in a greased Quiche form. Slightly press it into the form, take a fork and pitchfork the base.

Good news is: if it doesn’t look pretty, it‘ll be covered with the following mixture anyway: 100ml cream, 100g sour cream, 2 eggs, 50g Parmesan, Whisk it and pour it evenly over your culinary construction. Sprinkle some more grated parmiggiano on top and bake it in the oven for 40 minutes.

Switch the oven off but leave it in for another 5 minutes before taking it out and letting it cool down (ideally) or at least as long as you can resist the irresistible aroma of baked goods. The combination of Quiche dough and mashed potatoes makes it extra flaky and crumbly and the whole Quiche tastes less eggy, which usually is the case with Quiche (and which I don’t like. I love eggs, full respeggt, see photo, but if I want eggs then scramble them, boil them, fry them and serve them as eggs, not as Quiche). And now: Enjoy! If there are any, store the leftovers in the fridge and have them with a salad on the side the next day for lunch.