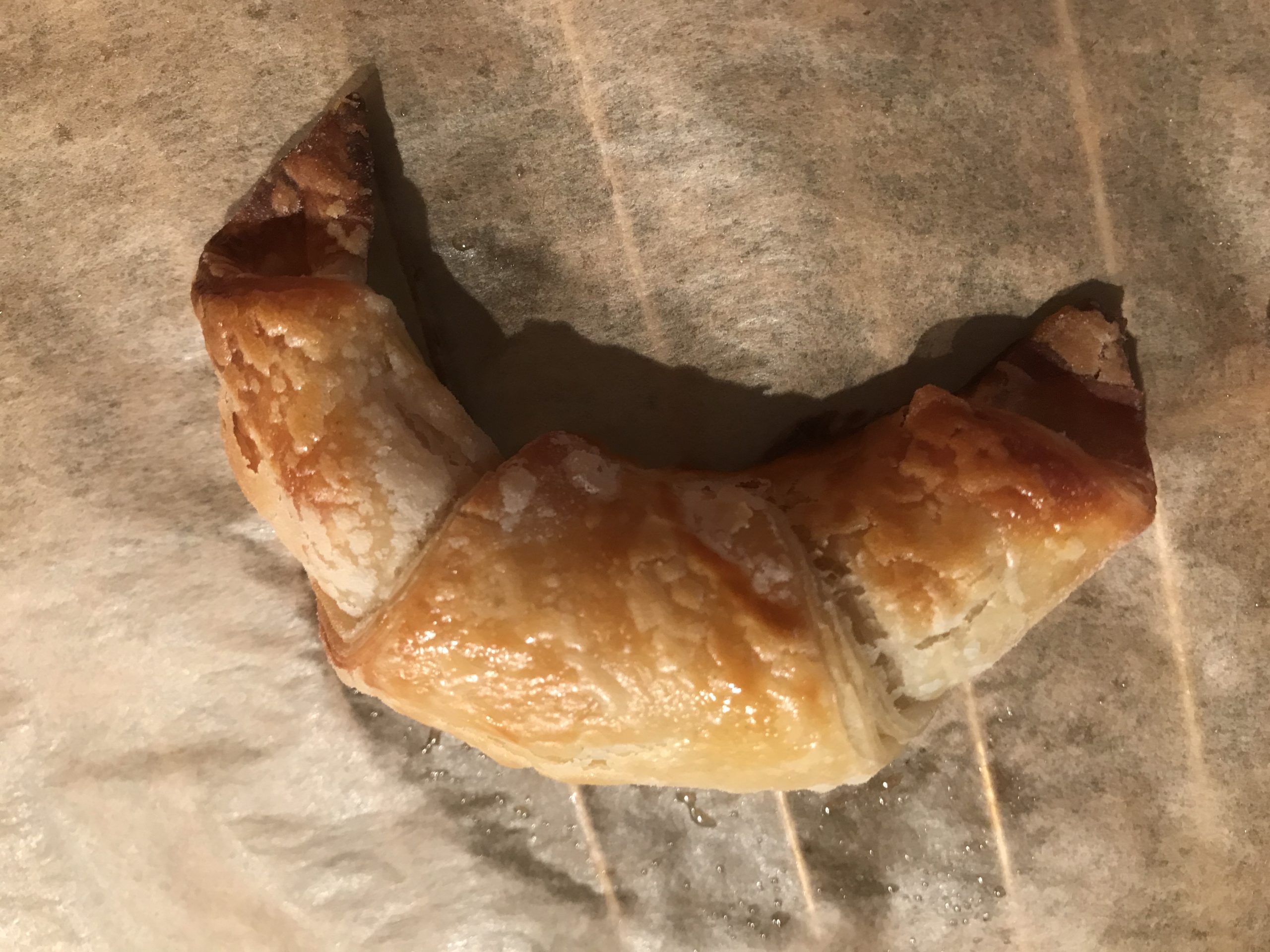 Quarantine = Baking Time. But then any time is baking time and I‘m only self-isolating not quarantining and that was a bad rhyme anyway, a so-called unreiner Reim, and we don‘t want no unrein, dirty, contaminated stuff, just everything disinfected and hand-washed often. And I can do better.

There was a young lady in isolation

Who dedicated this time to the creation

of lots and lots of baking

and currently in the making

is a French and buttery revelation!

Yes, I took the time and patience (lots of patience) to kill some time in these times we have to kill to kill the pandemic, to make Croissants from scratch! Et mon Dieu, c‘est magnifique! The secret to a perfectly flaky, tasty pastry, of course, lies in the butter. Anything tastes better with butter. And when you bite into a croissant, you gotta taste it. Every bite must feel like it‘s worth all the calories and like a pure act of sin and indulgence. So butter use plenty.

If you want fresh croissants the day after tomorrow (why is there no word for it??? ÜBERMORGEN. It‘s not that difficult, dear English language. How about tomorrowow? It‘s fun to say and has a WOW in it, so I hereby declare it the new official term for „2daysfromnowinthefuture“. Write that down, OED CEO.) you better start today. That‘s how long it may take. But it‘s worth it, trust me.

We start easy by simply getting all ingredients ready and out of the fridge about an hour before we really start so butter and yeast are at room temperature. Mix flour and salt in a bowl. Take a cup and heat up water, milk and sugar in the microwave and crumble and dissolve the yeast into it. Make a little dent in the middle of the flour and pour the cappuccino-coloured yeastcream into it. Cover it up with flour, cover the whole thing up with a towel and let it rise for half an hour. Time to do nothing, relax, vacuum the apartment, do the laundry, exercise, check instagram and twitter (very important in times of a pandemic. You really don‘t wanna miss out on all the conspiracy theories. smh).

Ready? Have some water and some flour ready, just in case, and start digging in with your (washed) bare hands and start kneading, adding more and more flour from the outer areas of the bowl until you have a smooth dough ball. If it seems to dry or to wet, add water or flour accordingly. Cover it up again with a towel and let it rise for another half an hour. Time to do any of the previously mentioned tasks or something completely different but this time get back to the kitchen a few minutes early and get the butter, a rolling pin, more flour and some parchment paper ready.

Give the well-risen dough another knead, take it out of the bowl and divide it into four parts. Quarter the butter as well.  Roll out the first dough portion so that it‘s about DIN A4-sized. Use plenty of flour while doing so and frequently turn over while outrolling. Put one butter portion in the middle and roll it out, too, postcard-sized. Now fold in the longer sides first, then the shorter ones so they‘re overlapping. Wrap it up in cling foil and store it in the fridge for at least 4 hours. Repeat with the other three portions.

Unwrap each portion and roll it out lengthwise, again with the aid and add of plenty of flour and plenty of turn-overs. Two things might happen which we don‘t want to happen: the butter breaks up instead of smoothly transforming and moulding. If that happens, just let it warm up to room temperature and try again. If the dough is too sticky, it‘s gotta go back to the fridge. If all goes well, we fold it back up, without the long sides this time (that was just to keep the butter in), just the overlapping shorter sides. Repeat. Repeat. Repeat. Yes, we‘re doing that whole procedure 3-4 times. French Origami for buttery delights and manifold layers of tender flakiness.

After the last roll-out, there‘s no fold-in. Instead, we cut each pastry into lengthy triangles and roll each triangle up, starting with the long side. The recipes I found suggested to moisturize the surface before rolling it up so it sticks together but I didn‘t and it still stuck. Bend them slightly into croissant shapes and put them on a baking tin lined with parchment paper. Leave a decent amount of space in between for they will rise and shine, and shine even more if you brush them with an eggyolk-milk mixture and put them in the preheated oven at 190°C for 15-20 minutes.

The best croissants, however, don‘t need extra butter. They are rich and intense and tender and flaky and tasty and buttery and hey, if you start now, they‘re ready just in time for Mother‘s Day. So hush, little darlings, and off you go to the kitchen.