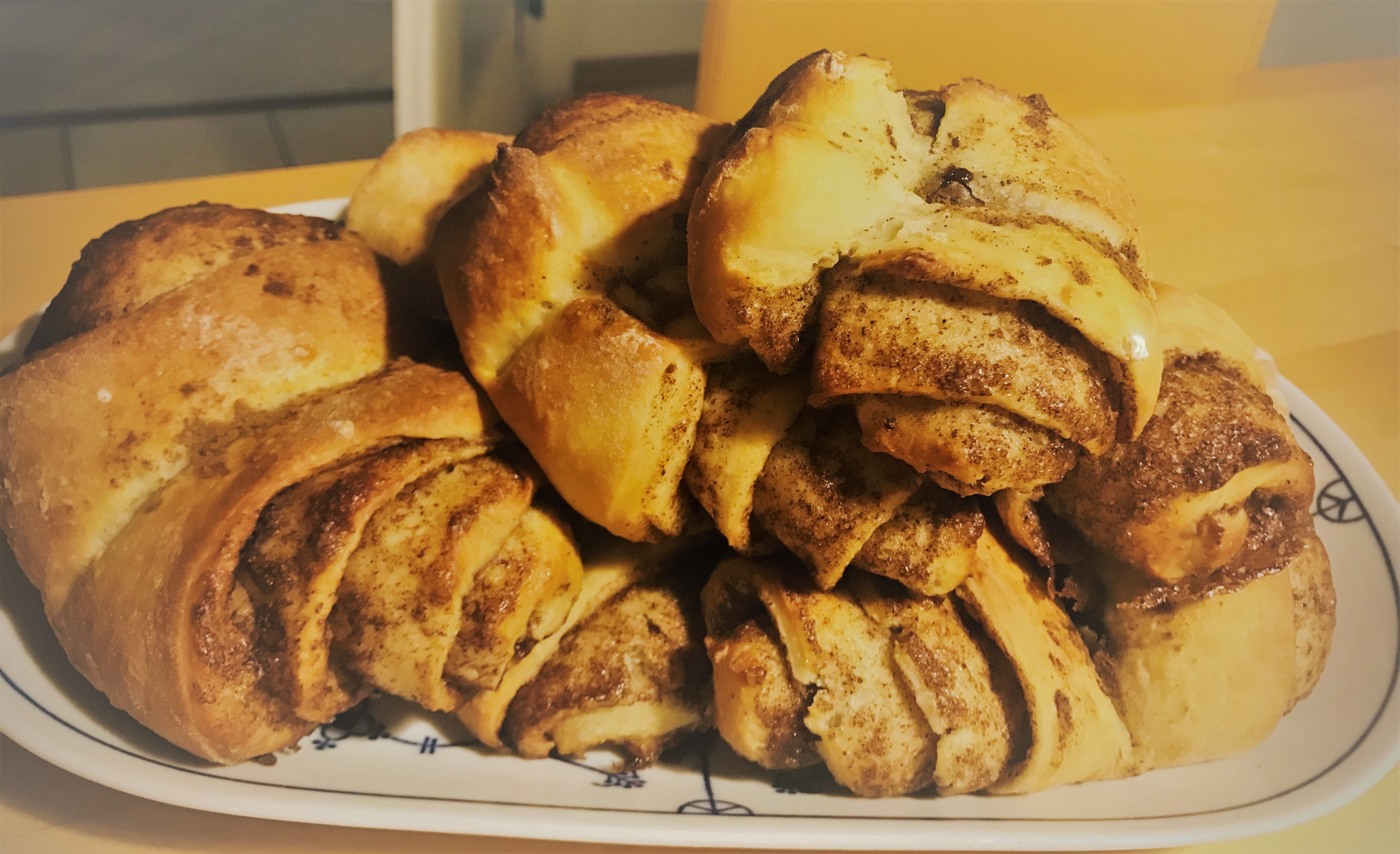 It’s October 31st, and my good friend and colleague Anne’s birthday – the only reason to celebrate. Not Halloween because one does not celebrate Halloween because it’s rubbish – and yes, contradictory to what I just said I’m writing this while being dressed up as the Eleventh Doctor but that is a long story for another time because I reckon you’d rather get to the recipe and hate epic tales (lengthwise) introducing them as much as I do but then I never said this is gonna be a recipe (unless you arrived here via my insta account where I promised you exactly that) so hey, at least now you know you’re eventually getting something nice out of this! Where was I? Anne’s birthday. Anne is a true Hamburger Perle and deep down south in Freiburg misses the steife Nordbrise a lot and something else even a lotter: Franzbrötchen. Hamburg style cinnamon rolls. Very difficult to get in Freiburg, although Café Auszeit makes very decent ones I’ve heard (I never tried them but I trust them because everything they do tastes lovely).

Since I love baking and sharing my baked goods and especially love sharing my baked goods with the people I love, baking something with love for Anne was the natural thing to do. Unfortunately, the idea didn’t struck me until the night between Sunday and Monday. I woke up, I googled recipes and found a perfect, self-claimed original Original-Franzbrötchen recipe. Which required a pre-dough that would have had to settle for 20 hours before I’d actually get to making the main dough with it which would then have to settle for another night and so on and so forth. A quick calculation clearly showed: no way I could finish it in time. And just because I might be dressed like one right now, I, unfortunately, am not a Time Lord and am stuck with the linear and restricted timeline we live in. Hence plan B was needed and found on one of my favourite sweet tooth food blogs, Zucker, Zimt & Liebe. Since I improvise in the kitchen more than a musician in a jazz club, I vaguely followed the guidelines but adjusted it to my liking, or, as The Doctor aka currently ME right now would say:

And actually, I’m pretty pleased with the results and overwhelmed by the aroma of cinnamon in my flat that promises warmth and cosiness on a wet cold autumn day, ideally paired with a literary journey to Zamonien,

And now congratulations! You made it to the recipe!

Heat up 300 ml milk and 65g butter on the stove, whip’em and let it cool down until lukewarm. Or a little hotter depending on your patience. Mine was still pretty hot. Just make sure it’s not boiling, we just want it all melted – no chunks! Mix 450g flour (I personally prefer spelt but since I don’t follow recipes I grant you the same rights. Very categorically imperative of me.) with 1 bag of dried yeast, 60g white sugar and 1 egg. Then pour in the butter-milk and knead with your hands until you have a dough that’s still gooey but not sticky. Add more flour if necessary. In the end, it helps flipping it around with a wooden spoon before you take it out of the bowl, give it a proper beating while pretending to be a mafia henchman getting info from an adversary,put it back in the bowl, cover the bowl with cling film and a towel and store it at a warm place. Leave it be and give it time to rise overnight. In the meantime, make some delicious oatmeal cookies with dark chocoate drops and salted caramel milk chocolate drops. Believe me, they are the best!

Now that we’ve successfully cookie monstered and are happily nibbling on one of those monster cookies, let’s get back to our real goal. Fast forward to the next morning, we melt 80g butter (on low temperature!), remove it from the stove and whisk in 100g sugar – I used 50-50 brown-white – and 3 tsp cinnamon (or more). Take a baking tin, put some parchment paper on it and preheat the oven to 180° Celsius. Now go and get that dough that should have doubled in size. Give it another proper beating, this time punching it with the Rocky soundtrack playing in your head. And just because I can, here’s another cringeworthy pun – ladies and gentlemen, I give you: the punch line!

Roll out the dough on a floured wooden board until it is rectangular with a = 50cm and b = 30cm. Sort of. I never measured it but as long as the sides are roughly in that length ratio, you’re good. Pour the cinnamon cream and spread it evenly.

Then roll up tightly from side a (the longer one) and cut the cinnamon sausage into trapezoidal pieces. It should add up to 8-10 pieces.

Now turn them over so that the they sit on the shortest bit. Put them far apart on the baking tin and use the other end (the handle, the stick, whatever you call it) of a wooden spoon to gently notch each Franzbrötchen in the middle so that the sides sort of fold over on it. Cover them with a kitchen towel and let them rise and rest for another 15-20 minutes. Uncover them from the cloth and recover them slightly and lightly with a mixture of milk and egg yolk, ((s)lightly being the key word here). Sprinkle a little more cinnamon on top and bake in the oven for appr. 20 minutes.

Can you already smell it? Mhmhmhm…… soooo good!

Best served fresh from the oven and still warm.